I thought it might be useful to take a bit of a look at inflation, as it is a word that is often in the news and causes concern as to how this might impact on investment returns.

I think we are all well used to identifying certain inflationary factors, such as the oil price for example. When oil goes up, the cost of transporting everything also increases, and prices get passed on to the end consumer.

This is perhaps most ably demonstrated now by the current surge in food prices and in this regard, the United Nations Food Price Index, which covers key agricultural materials such as cereals, vegetable oils, meat, dairy products and sugar is up 33% year on year and that in fact, is the fastest rate of growth since 2011. This is by no means a new phenomenon as the graph below ably demonstrates. 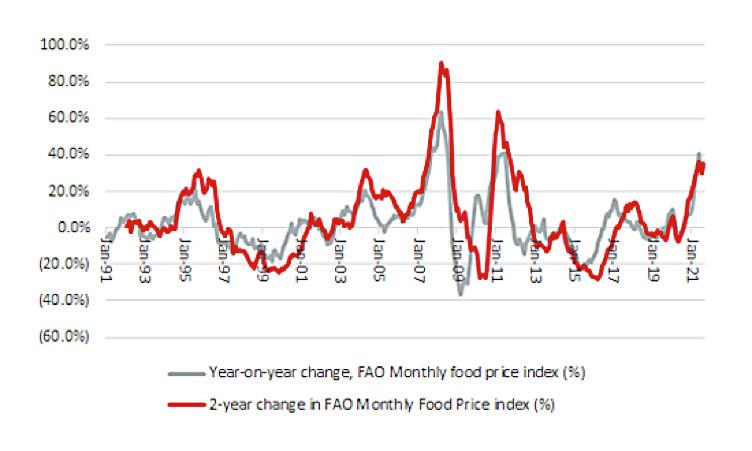 Source: Food and Agricultural Organisation of the United Nations

So, it begs the question, what is driving food prices higher and in fact, there are a number of factors, including shipping and port bottlenecks, shortage of truck drivers, bad weather in Brazil, where they suffered both drought and unseasonable frost, which affected both oranges and the coffee supply.  Largely because of the one off or short-term nature of these aspects is why Central Banks are saying that these are transitory factors, which is why they say they will hold off interest rate increases.

The doubters though, will point fingers at the 1970’s and start to draw analogies when there were 3 distinct waves of inflation, which led to the Federal Reserve and the UK increasing interest rates to double digit levels, which clearly, is something that neither consumers nor the financial markets want to see again.

In recent days, I’ve seen the word stagflation appearing in some of the financial commentaries, which can occur when there is economic stagnation at the same time being accompanied by rising prices, i.e., inflation.  In particular, it occurs where the money supply is expanding whilst supply is being constrained.  With the current delivery problems that we are seeing in the UK, together with the huge amounts of money still being pumped in by Central Banks, this is perhaps a concern.  The knock-on effect of stagflation could be that you would see increases in unemployment and prices, which in turn makes it more difficult for people to buy goods and it can become difficult to solve.  A typical way to solve this is to see economic performance boosted by Government spending.  That thought of course, takes you into a whole round of political debate, which I am not going to venture into.

It is a bit of a tightrope though because if controls go too far, then you run the risk of creating a deflationary environment, this is where you see a general fall in prices, which could be described as negative inflation.  The problem here is that deflation can often contribute to lower economic growth, with people deferring spending in the hope that prices will come down further.  That also is not good for the economy.

It is for all these reasons that Central Governments set inflation targets at low levels with 2% being the current target for the Bank of England and Central European Banks.  This is because a little inflation is good for the economy, and it helps to keep things moving and with cash flow arising from spending and keeping supply and demand in balance is healthy for all concerned.

As far as the markets are concerned, extreme intervention or over reaction could unsettle Stock Markets and an unexpected increase in US interest rates for example, could send jitters through global Stock Markets.

That having been said, most investment commentators seem to remain bullish and are of the opinion that whilst volatility will be with us for the foreseeable future, there are also opportunities and potentially, more winners than losers.  Consequently, I think we should assume we will see some bumps in the road ahead, but nothing to suggest that we should be overly concerned.

For some people, when there are volatile markets, they tend to think about turning to cash deposits as a more secure place for their money and whilst holding cash in times of market volatility for short term projects is a prudent choice, over longer periods of time it is not generally recommended. The main reason for this being, that although you are not exposed to investment risk, you will be exposed to inflationary risk. Inflationary risk is the risk that if the interest earned by the chosen cash account does not match inflation (measured by RPI) the ‘Real’ value of your cash will be depleted over time.  I have included below a table detailing RPI over the period Jan 01st 2010 to Dec 31st 2020. 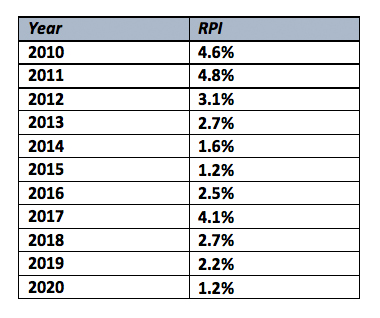 If you ‘invested’ £100 into a bank account at the start of 2010, 10 years later (at the end of 2020), so long as the interest rate received at least equalled Bank of England Base Rate, your money will have risen in value to £105.27. In contrast £100 of household groceries across the same period will have risen in price to £135.26 (using the above RPI figures). Therefore in ‘Real’ terms your cash will have lost part of its ‘value’ - over 29% of its original purchasing power!

These are some of the reasons why we look to more diversified investments and in subsequent News and Views, I will look at how investment portfolios work, why they are invested in the way that they are and how they are structured to provide steady returns in excess of the inflation rate.

On the personal front, we are now getting close to our travels, and we will be departing for Canada on 7th October, which will see Chris and myself away from the office for 7 weeks.

We will however be keeping in touch and of course, both Lesley and Nigel will be available to deal directly with any issues that need our input, so it will be very much business as usual.

I will also be writing with further News and Views every 2 weeks, and I will let you know how our travels are progressing at the same time.