Issue 42 - The Pingdemic and an Outbreak of Phobophobia!

[Chris tells me that she thinks I have been a bit political with this issue which was not my intention but see what you think.]

Over the last week, I am sure you will have noticed that we have a new word that has crept into the vocabulary in the form of the ‘pingdemic’.  This is a phrase that is associated with the NHS Test and Trace app, whereby people are being contacted by the NHS to notify them that they’ve been in close contact with someone who has tested positive for Corona virus.

The ping is referring to the message being “pinged” to mobile devices and the Press have coined the phrase pingdemic because of the impact that this is having.

It was reported recently that some 500,000 people had been pinged in a week, with the associated 10 day self isolation being required.

Clearly, this is having a major impact on some businesses and in particular, I believe it was a number of branches of the Weatherspoon’s chain that had to close because so many of their staff had been pinged with the self-isolation notification.

There is therefore a major concern in certain business sectors that excessive pinging will have a huge negative impact on their businesses and as a consequence, we now hear that an increasing percentage of people that had previously signed up for the test and trace app are now either deleting it or disabling the notification section!

To my mind, this seems to be another example of something that started out with the best of intentions that is deteriorating rapidly into confusion and a whole series of unintended consequences.

The messages we are receiving are mixed as ever and become ever increasingly confusing.  For example, what is the definition of being in close contact with someone?  If you look at the current Government guidance, it starts simply enough by saying if you live in the same household as a person who has symptoms of Corona virus or who has received a positive test result, then you should follow the stay at home guidance with a need to stay at home and self-isolate for a period of up to 10 days.

In a more general sense though, a contact, is a person who has been close to someone who has tested positive for Covid-19.  The Government say you can be a contact at any time from 2 days before the person who tested positive develop their symptoms and up to 10 days after, as this is when they can pass the infection on to others.  But that still leaves the question, what constitutes contact?  The same household definition is easy, but it goes on to say that having face to face contact, including being coughed on or having a face to face conversation within 1 metre, being within 1 metre for 1 minute or longer without face to face contact or have been within 2 metres of someone for more than 15 minutes, either as a one off contact or cumulatively over 1 day!

How on earth can you think back and work out whether any of those conditions applied – it’s no wonder that people are confused.

Turning then to travel considerations, you could be identified as a close contact if you’ve travelled in the same vehicle or plane as a person who has tested positive for Covid-19.

That then leads on to the current traffic light system and the way that this has been amended with effect from 19th July, with people who are fully vaccinated, travelling back from amber list countries, (excluding France), having to take a PCR test within 2 days of returning, but not having to quarantine on arrival if they are fully vaccinated.

When you read through the Government recommendations, they then go on and on, looking at all different scenarios and is it any wonder that people end up even further confused.

I would stress, this is not intended to be any political statement but rather, frustration at the muddled situation we find ourselves in!

There is however, another symptom that is arising from all this uncertainty, with, I believe, more and more people experiencing a form of phobophobia, probably for the first time in their lives.  One definition of phobophobia being ‘an irrational or disproportionate fear of developing or experiencing a phobia’.  I am hearing an increasing number of people talking about friends and family who are now not doing things because they’re frightened of the potential consequences of their actions, and yet if we are to believe the levels of protection that are afforded by having both jabs, then actually a fairly sensible approach to daily life can minimise the risk of infection in any event, with some confidence that if you are unfortunate enough to contract Covid-19, then there is a high percentage probability that you will be protected from serious illness.

The daily incidence of cases may be going up exponentially at the moment, but the rate of hospitalisations and indeed, the mortality rate, are not demonstrating the same proportionate increase.  The graph below, published by the UK Government Dashboard, shows the 7 day average of new cases from February 2020 and you will see the average number is now approaching the peak that was reached back in the winter.  However, the number of patients in hospital with Covid, peaked at just under 40,000 in the winter and today, is at 4,567.  Rather more starkly, the average mortality rate in the winter, peaked at 1,250 a day and currently, the 7 day average is 49. 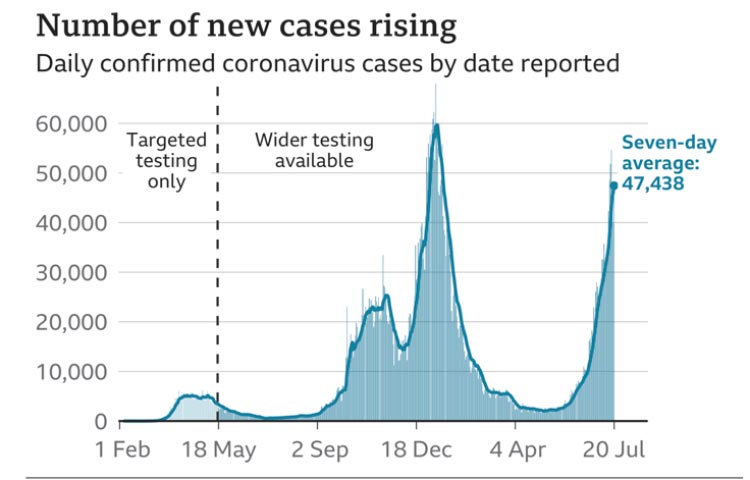 I am not suggesting for one minute that any level of hospitalisations or death is acceptable and indeed, they are regrettable, but one has to look at the proportionate impact.

My final thoughts on the subject are that it seems that the numbers of new cases that are affecting younger people is much higher now than it was in the winter and typically, even without a vaccination, young people tend to attract much milder symptoms.

The latest move, as I saw quoted in one of the newspapers, of the Government moving from “carrot to stick” for younger people, bringing in new rules that from the end of September, any nightclub goers will need to be fully vaccinated, whether you actually agree with this or not, is another attempt to address the most sensitive areas of the population that are generating the higher number of cases.

I was pleased to see in the same article that other crowd situations may also face the same requirements and although the entertainment and leisure industry may cry foul and say that this is just one more blow to them – my view is that there is plenty of time for people to get double jabs and be fully vaccinated by the end of September and therefore, it a matter of their choice, rather than imposed restriction that may restrict their ability to go clubbing or to other venues.

I say again, this is not intended to be a political rant but rather, I was prompted to summarise these thoughts because I am genuinely concerned that the level of anxiety is potentially getting out of control and that we need to remind ourselves that taking sensible precautions, even if face mask wearing is not mandatory and social distancing is no longer a legal requirement, then to take those sensible precautions and to wash hands and sanitise regularly and generally think about managing the risk, will not only help to protect from Corona virus,  but also from other communicable diseases, which has to be good and sensible for everyone.

Surely these self disciplines are worth following as the new norm and this is the best way to plan for the future.

To finish these thoughts with a quote, in his inaugural speech in 1933, Franklin D Roosevelt said within one of his opening lines, ‘Let me assert my firm belief that the only thing we have to fear is fear itself – nameless, unreasoning, unjustified terror which paralyses needed efforts to convert retreat into advance.’

If that’s a bit too heavyweight for you, “Nothing to Fear but Fear Itself” was also a 1987 episode of the TV series the Golden Girls, but actually that was referring only to a fear of public speaking!

You can breathe a sigh of relief now, my rant is over

As always, take care and we will keep in touch.