In the last News and Views, I was telling you about the experience that I had encountered as we led up to a trip to Portugal, with all of the associated hurdles to cross and tests to attend. Well, I’m pleased to say that the trip went extremely well and we are now back safe and sound having returned to the UK on Saturday.

I thought I would share the experience of the actual travel because that was quite interesting in several ways.

Having read previously that paper is not favoured at the airport and they prefer you to have electronic copies of everything, I had stored the relevant documents on our phones. Mainly these were our boarding passes, the negative PCR Covid test that we had had 72 hours prior and the passenger locator form for entry into Portugal.

Having been warned to allow extra time for check in, we dutifully turned up at Gatwick 2 hours prior to the flight to find the check in area completely deserted, with only 6 or so people in evidence and we were greeted by an EasyJet representative who checked that we had the relevant documentation with us and scanned our boarding passes.

From there, we went to the automated bag drop, which duly delivered a tag that we fitted to the bag, put it on the conveyor belt and within 5 minutes we were on our way to the security check in. As you know, that can often have long queues, but on this occasion, there were about 5 people in front of us and with very little fuss, we were soon through and in the duty free area. Most of the concessions were open, but the place was deserted.

It’s at this point I think it’s time to share some holiday snaps with you – don’t panic, there are only two and neither of them is me on the beach! (Relief all round!)

If you have experience of flying from the north terminal at Gatwick, you will know how crowded it normally gets and indeed, that’s similar with most of the UK departure airports we have used. The following photograph though is a picture of the departure lounge and you can see just how deserted it was. 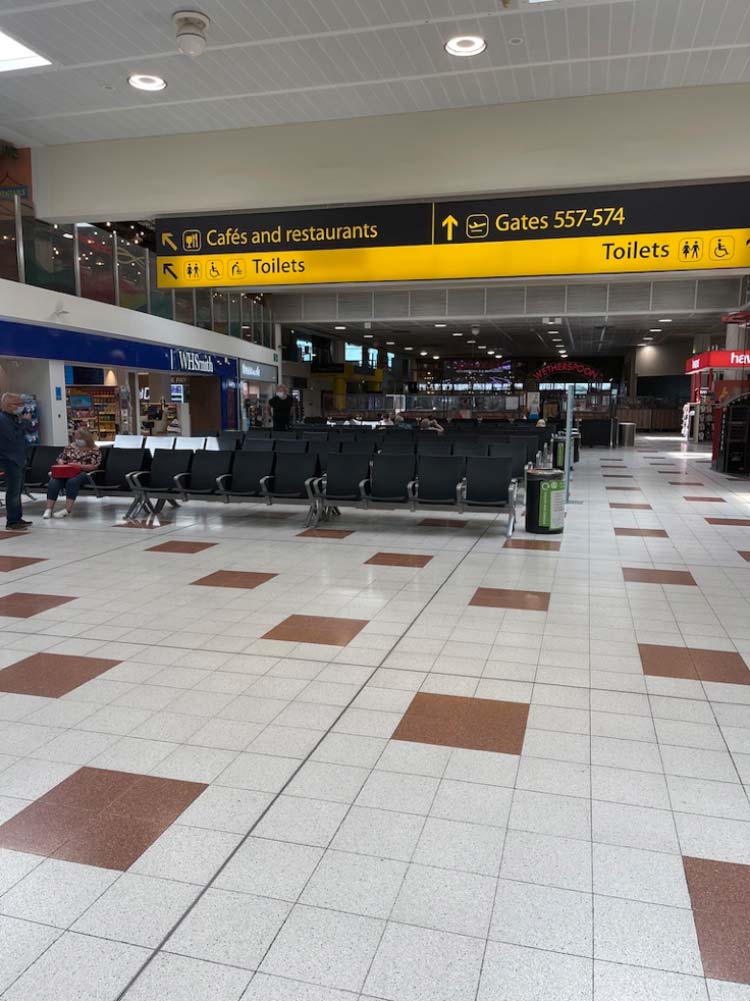 The second picture is that of the departure board and at first glance, you might think that there are a lot more flights than you would expect until you look more closely and see that the first part is for Saturday which was the day we were travelling, but the rest of the board was for the following day. Our flight to Faro was showing to depart at 3pm and I’m pleased to say that Weatherspoon’s (as seen above) were open and therefore we were able to enjoy a leisurely glass and a snack before boarding. 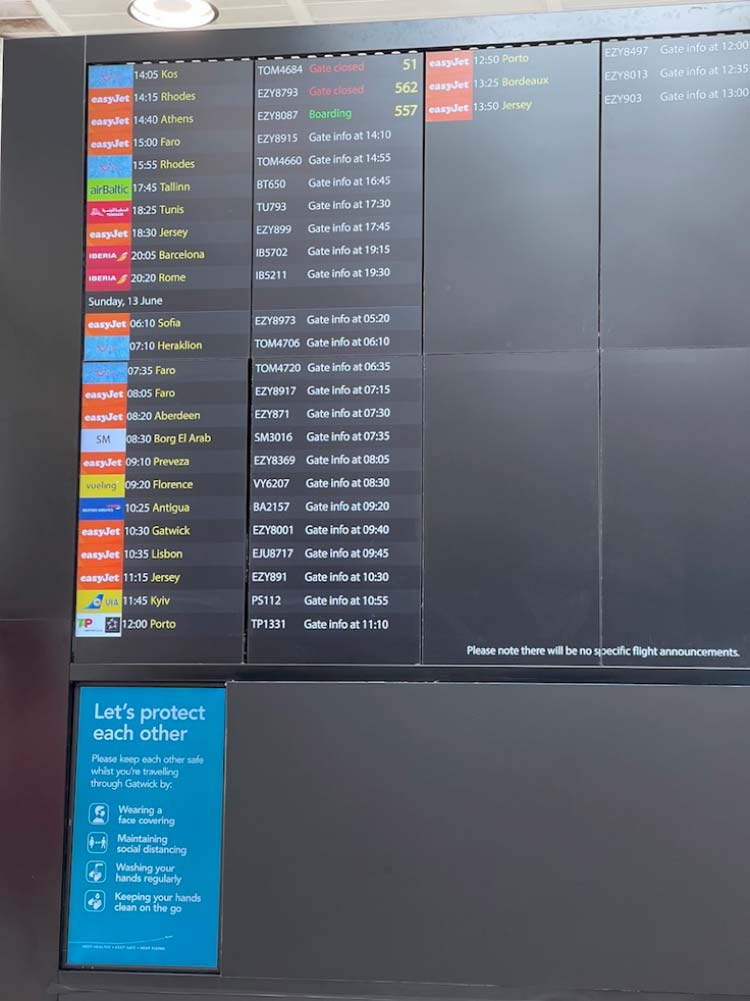 The plane was about 75% full and masks were worn at all times, with everybody being fully compliant and I have to say, it felt a safe and well organised environment.

On arrival in Portugal, we actually landed half an hour early and only 45 minutes after actually touching down, we were driving out of the airport in our rental car, having sailed through immigration, baggage collection and through to the car hire office, where there was only 1 person in front of us.

In advance of our return journey, we had to complete a video call to undertake a lateral flow test, which again proved negative and then completed the passenger locator form to re-enter the UK – that was fun with all the questions they had! And then the return journey was similarly uneventful, albeit that check in at Faro airport was nowhere near as well organised as Gatwick, which resulted in the plane being late taking off by the time all the final passengers were on board.

We were due to arrive at Gatwick at 9.30pm, so I thought I would check to see how busy the airport was going to be. In fact the flight prior to us, landed 1½ hours earlier and after us, there was only one more flight that day. Gatwick was therefore as deserted coming back as it had been going out and coming through passport control, we were able to use the electronic scanners, which automatically tied up the other documentation and we were through in less time than normal.

The final chapter is that we went for our Day 2 tests, which were negative and tomorrow we are due to go for the Rapid Release Test, which providing they are negative, means we will be out of self-isolation on Friday.

In conclusions therefore, apart from the extra hurdles one had to jump over to get all of the documentation sorted, and yes, that did cause a few stresses and strains, the actual travel itself was absolutely fine.

What has been interesting to note on our return is that some of the statistics being quoted are that having looked at 23,000 passengers returning from amber list countries, there were only 89 cases identified of people testing positive for Covid and of those, there were no new variants noted. The most recent statistics quoted for the UK are that 100 people in 100,000 are testing positive for Covid and therefore, the statistics for returning passengers might be at a higher level of around 350 per 100,000, but it is nowhere near the apocalyptic levels that were predicted or anticipated in the Government decision making process.

Turning briefly now to the investment world, although there have been a few jitters in Stock Markets, there is nothing significant and most short term reductions have been recovered from and the most recent concerns were once again linked to inflation and the potential for interest rates to be increasing sooner rather than originally anticipated. Mind you, on that one, what they are talking about is that maybe rates will nudge up towards the end of 2022, rather than in 2023, so there is plenty of time for all that to settle down.

I think the only disaster area to note at present is for people who have invested heavily in crypto currencies with some fairly significant falls in values, particularly with Bitcoin, which has been compounded by the interventions taken by the Chinese authorities in closing down crypto currency mining Companies.

I have to say, even though I might have just summarised the current position with crypto currencies, they really are a mystery to me and to most people I think, and probably best avoided for the majority!

All being well, I will be back to the office as usual on Monday of next week and thankfully, it looks as though we are seeing a return to summer weather.

As a final thought, not all statistics are helpful and in fact, earlier this week, it was recorded that locally to the office in Goudhurst, at a small village called Frittenden, the maximum temperature on the day of the summer solstice was below that recorded on last year’s winter solstice! In fact, it was the lowest summer solstice temperature recorded for over 40 years – hopefully, it will be that long again before we challenge that particular record.

As always, stay safe and we will keep in touch.