Issue 38 - Inflation is Back in the Spotlight – but Should it be?

In my last News and Views, I made some small reference to inflation figures that were being published and that these had been played down by Central Banks as being a blip.  Since then however, more and more of the headlines are latching on to the inflation concerns and how these could have an impact on investment markets and potentially affect the economic recovery.

As always, I thought it would be appropriate to give you the benefit of a few more of my thoughts on this subject, because if we rely too heavily on the headlines, you could be forgiven for thinking that we’re in for hyperinflation, the likes of which we saw back in the 1970’s – in fact, I saw one commentator over the weekend drawing such an analogy and saying how few people would have clear recollections of the impact that very high inflation had on business.

To my mind, this is simply scaremongering in the extreme and I genuinely do not believe that inflation is going to be running out of control.

There are, without doubt, inflationary pressures around at the moment, but these are likely to be short term in nature.

In many ways, the short term inflation is likely to be driven as we come out of Covid 19 lockdown, with a lot of pent up spending that is likely to hit the High Street and on-line shopping, which will all help to fuel the social and economic recovery.  This anticipated upturn has encouraged reassessment by Governments and Central Banks to look at their policies, including the impact for inflation and interest rates.

The fact that this debate is happening at all led to markets responding with a swift adjustment in prices in the world stock markets.

This is in fact, what has led to the short term volatility we have witnessed, but markets are very resilient and no sooner had values dropped, than bargain hunters were snapping up those lower prices and market values were quickly reinstated.

I think one area where we are seeing a more severe upturn on inflation is in construction costs, and towards the end of last week, I was speaking to one of our clients, who is highly involved within the construction industry, both in Italy and the UK and he said that their raw material costs had been increasing exponentially.  Talking to one of our UK Fund Managers, he confirmed that building costs are indeed, skyrocketing in the short term as certain materials start to run short and it’s the age old question of supply and demand.

Although all of these factors are real and are manifesting in the markets today, the Central Banks, including specifically the US Federal Reserve, the European Central Bank and the Bank of England, they have all indicated that their view is that this is short lived inflation pressure and they are happy to look through it when looking at their longer term strategies.

In fact, conversely, there are many deflationary headwinds that could be driven by developments in technology which themselves have been accelerated due to the pandemic and as importantly, underlying unemployment rates and spare economic capacity will all play their part.

As I saw one commentator put it quite succinctly, these factors ‘remind us that there is a need to distinguish between shorter term price distortions as the world exits a pandemic, vs. the longer term price dynamics where the evidence is in doubt.  As the Federal Reserve Chairman, Jerome Powell, observed in February, inflationary pressures were not a threat prior to the pandemic when US unemployment was at a 50 year low of 3.5%.  Further, it is unlikely that there will be sustained inflationary pressures now, with a US unemployment rate estimated by the Fed to be closer to 10% in January, particularly once the pandemic driven fall in labour market participation and other factors are taken into account’.

In addition, putting my cynic’s hat on for a moment, central Governments can’t afford the cost of borrowing to go up too much in any event because of the huge amounts of debt they are all now managing and although interest rates have been used to try to manage inflation historically, increases are unlikely to be deployed in the short term and the inflationary pressures should even out over the next few months.  [Having stuck my neck on the block with that view, we can only but wait and see what happens now!]

As always, it can be easier to demonstrate these things in pictures and therefore I thought the following two graphs might be of interest.  The line graph actually plots global inflation since the early 1960’s through to 2019 (this was the latest such graph I could find) and you will see there have been a number of spikes along the way, the last notable one being with the global financial meltdown in 2008/09,  but the trend has overall been downwards and continues to be so. 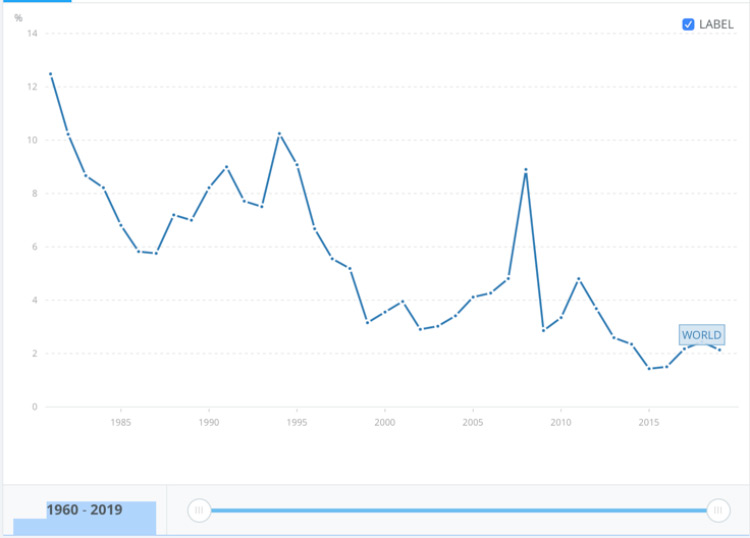 The second bar chart perhaps is a little more meaningful inasmuch that it shows again global inflation rates from 2015 through to the current year and forecast for years up until 2025.  Whilst again this shows a small spike in 2021, this expectation also demonstrates that this is not a runaway trend, but rather that it settles into a fairly repeatable pattern.  Of course, this is a global statistic and individual economies will vary greatly from this average, but nonetheless, it helps to endorse the points that I am trying to make. 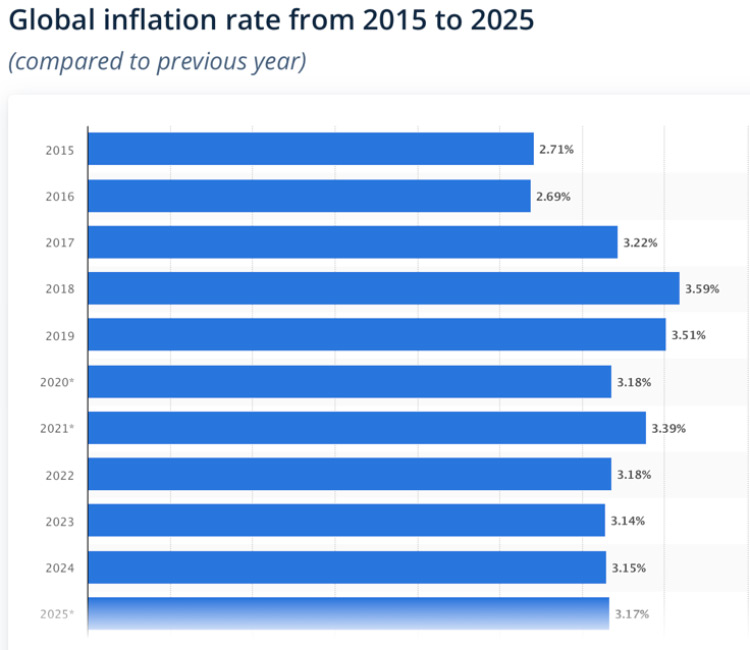 Turning to Covid 19 for a moment, it’s encouraging news this week that both Pfizer and Astra Zeneca seem to be virtually as effective against the Indian variant as they were against the Kent variant and other strains of the virus and hopefully, the roadmap can therefore proceed as planned in the UK and as other countries throughout Europe and further afield are catching up with their vaccine programmes, we will see many countries turn the corner soon.

I still have longer term concerns for third world countries and particularly when you hear that there are a number of countries in Africa where the vaccines that they have are going out of date simply because they don’t have the infrastructure and/or organisation to get them delivered and administered on time, which is a great pity.  I cannot help feeling that more effort is required from the likes of the G7 countries and as they are due to meet in Cornwall next month, who knows, we might even see some initiatives coming from there.

As always, I hope that you’re keeping well, take care and we’ll keep in touch.