Issue 36 - Nearly Halfway With The Vaccinations & A Short Trip Away!

I have been trying to find out the exact population of the UK and the best estimate seems to be just over 67 million, of which, the adult population is around 50 million. The reason I was curious is because the total of first and second jabs in the UK has passed the 48 million mark, which suggest to me we must be around the halfway mark, based on a total 100 million being needed overall. When you consider that the vaccination rate is continuing at over 500,000 per day, this is a truly remarkable achievement.

Thankfully, EU countries seem to be catching up at last and the US roll-out continues at a pace but right now, the headlines are all about India and the growing crisis they are facing!

With a population of 1.4 billion and over 300,000 new cases a day, it is no wonder they are running out of vital supplies like oxygen and ventilators. It was good to see the UK and some other countries, stepping up to the plate to help where they can. The trouble is, there are many poorer countries in the world who cannot afford the vaccines, let alone have an infrastructure that can deliver anything like a comprehensive vaccination programme.

Then we hear about people complaining that their travel plans are still uncertain or perhaps being curtailed and it begs a question about a sense of priority, particularly when we are reminded by the World Health Organisation that “no one is safe until we are all safe”.

Thankfully we have seen the Covax scheme launched which aims to share vaccine surpluses with the poorer countries. To date, something like 38 million doses have been sent to 98 countries. They sound big numbers but in reality, it is a drop in the ocean when you consider we are talking about in excess of 4 billion people in third world countries.

I am not trying to be negative, but rather, to put things into perspective and to say how lucky we are to live where we do and to have the resources available to us.

Chris and myself had our second jabs yesterday and whilst it felt very reassuring, it was tinged with a feeling of guilt as well.

Talking of guilty feelings, we have taken a couple of days off to make a long weekend of the early May Bank Holiday and it almost feels like we are “bunking off school”.

We are members of a boat club and have access to boats moored on the river Hamble in Hampshire and so we are spending a couple of days on the water before heading to South Devon for 3 nights in an Air BNB. It seems to be ages since we had any time off, but it is good to get a little down time for sure.

On Thursday we had a cruise around Portsmouth Harbour and I was fascinated to see the two aircraft carriers, Queen Elizabeth and Prince of Wales moored alongside. From a small boat they look absolutely enormous, but I bet they look tiny when you are trying to land your aircraft on them. I thought about taking a picture to include in this newsletter but wondered if we might be “blown out of the water” as there was a heavy armed police presence keeping a close eye on any craft venturing too close. What I didn’t know was that Jamie (my grandson) did not have the same concern so here they are! 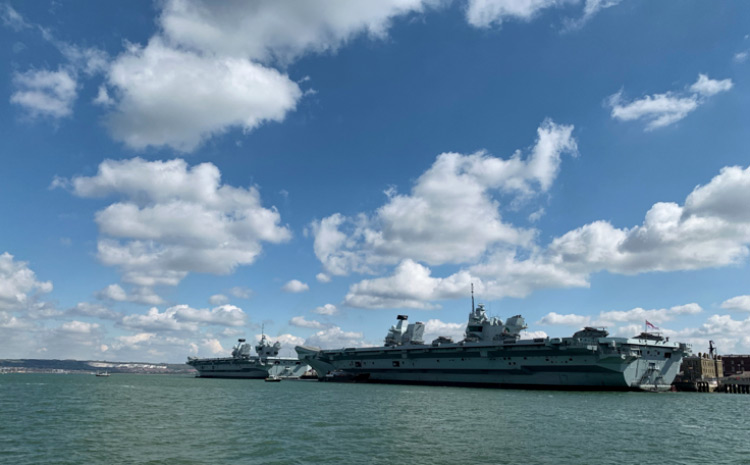 The one in the foreground is the Queen Elizabeth.

Turning now to the markets, we are seeing the first quarter results being announced with better-than-expected results appearing from many areas, including Banking and of course technology companies. Without a doubt, the economic recovery is well under way in the UK and US and despite the ever-present concerns about Covid globally, the main markets are shrugging off the concerns. On a couple of days, we have even seen the FTSE 100 index in the UK venture north of the 7,000 mark, closing yesterday at 6,961.

With the expectation that foreign travel and indoor socialising will both be largely allowed from 17th May in the UK, this is likely to help the leisure and travel sectors to start to rebuild as well.

We have a long way to go but so far, we seem to be on the forecast track of economic recovery, if not ahead of it, which will be reflected in market prices and investment values.

Enough for now – I am back to my bunking off school scenario!

As always, take care and we will keep in touch.